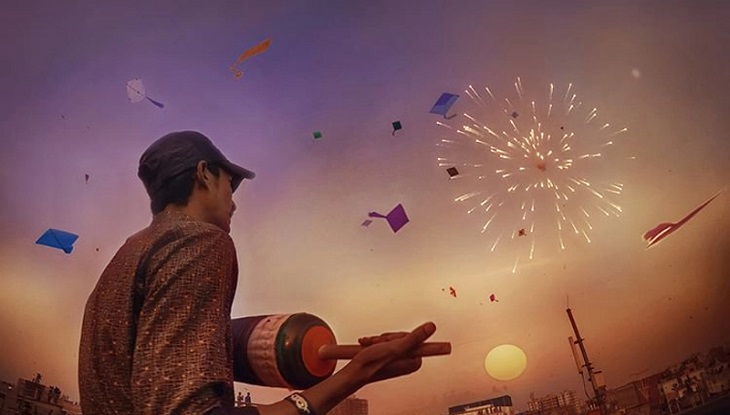 Bengali month Poush's farewell today. Sacraine, a traditional festival of the people of old Dhaka, has started on the last day of this Poush month in Bangladesh, the land of thirteen festivals in twelve months. Preparations for kite flying have been going on on the roofs of the houses since sunrise on Friday (January 14) morning. From giving yarn and manja to flying kites, cake festival is also being organized.

It can be seen on the ground that when the sun shines, the kite starts flying in the sky. Adolescents on the roof of the house and the noise. Dragons named Pandar, Chokhdar, Dabadar, Baldar, Lejwala, Patang etc. appear in the sky. The competition to raise one's kite to the top begins. With this comes the fight of kite fighting.

It can also be seen that the sound system has just started playing on the roofs of some houses in the Bangla Bazar area of ​​old Dhaka.

The number of kites in the sky will continue to increase from the beginning of the afternoon. Pithepuli festival will be held in every house. Colorful lanterns will fly in the sky as soon as evening falls. The sky of old Dhaka will be bright with the light of fireworks. As soon as the evening is over, the sound system and dance-song will start.

On the other hand, as a result of the celebration of the first dawn of the English New Year 2022 (December 31, 2021), fires broke out in different parts of Dhaka. In addition, the city dwellers are suffering due to the loud sound of fireworks. The whole metropolis was shaken by the fireworks and the fire of the lanterns fell on the houses in different areas.

With this in mind, it has been reported that on the day of Poush-Sankranti or Saccharin festival, it will be banned to blow up fireworks and lanterns with loud noises. The Dhaka Metropolitan Police (DMP) has already informed the senior police officials about the information.

DMP Commissioner said. Shafiqul Islam said, "We are making arrangements to ban the saccharin festival." And I will talk to the leaders of different communities in old Dhaka so that it is not celebrated like this.

He further added that it is difficult for people to go from house to house and stop such activities. We will sit down with the chiefs of old Dhaka and talk about the issue, we are taking initiative to stop these.

Chance of heavy rain due to thunderstorm